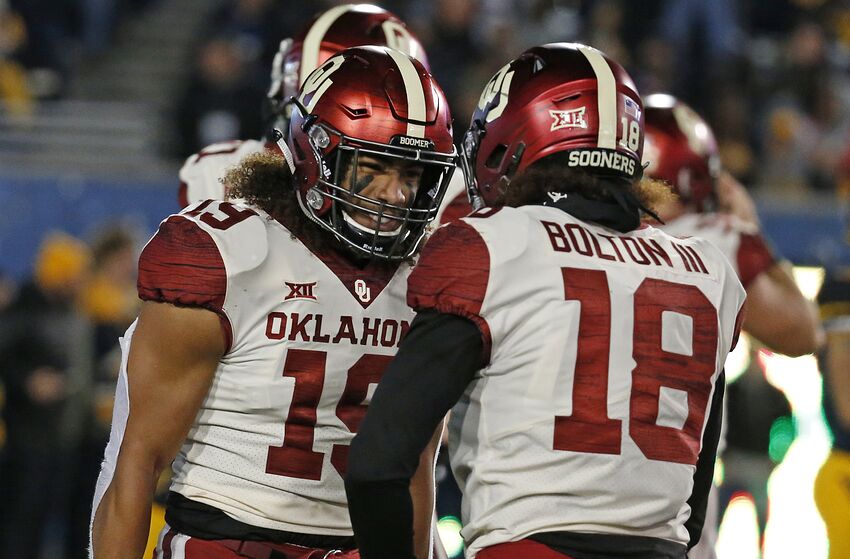 MORGANTOWN, WV – NOVEMBER 23: Caleb Kelly #19 of the Oklahoma Sooners celebrates after forcing and recovering a fumble for a 10 yard touchdown against the West Virginia Mountaineers on November 23, 2018 at Mountaineer Field in Morgantown, West Virginia. (Photo by Justin K. Aller/Getty Images)

The Oklahoma Sooners and head coach Lincoln Riley made it through the regular season, won the Big 12 Championship and are headed to the College Football Playoff. Now, they have a decision to make.

The Sooners made an abrupt change following a dissapointing 48-45 loss to Texas on Oct. 8, using the bye week to install Ruffin McNeil as the interim defensive coordinator.

While there were some highlights – a couple of decent performances against TCU and Kansas State, two big-time turnovers against West Virginia and a huge fourth quarter in their revenge 39-27 win over Texas – the defense was far from great.

The Sooners became the first team in the history of college football to surrender 40 or more points in four-straight games and manage to win them all. Many around college football called for the Sooners to be left out of the four-team playoff based solely on the shoddy play on that side of the ball.

McNeil is 60 years old and by his own account in the twilight of his career. He has stated on the record he intends Oklahoma to be the last stop for him. It’s not likely that McNeil is suited, nor wants, the job long term and the Sooners seem like a lock to have someone new calling the defensive plays in 2019. The question is, will there be someone else doing it in the last game of 2018?

If the Sooners do make a move to hire a new DC, it likely won’t come until after early signing day. Anyone hired in that position would have to make up way too much ground with recruits and Riley himself is far too busy out on the trail to deal with such a big decision anyway.

The answer to this question may very well come down to who the Sooners have in mind for the job. Some have speculated that Alabama’s Pete Golding could be among the potential candidates.

If so the Crimson Tide’s Co-defensive coordinator could create some major co, ntroversy, not to mention draw the ire of heavyweight Nick Saban, should he decide to come aboard and help the Sooners game plan for his former team.

Next: Why OU’s Kyler Murray should win the Heisman

However, if the Sooners were to go out and get another guy from the rumor mill – like say Ohio State co-DC Alex Grinch or Tim DeRuyter from Cal – that don’t come from teams still active in the College Football Playoff, we could see a change sooner rather than later in an attempt to get said coach out on the recruiting trail before the Febuary signing day, not to mention give his two cents preparing for one of the country’s top offenses in Alabama.