Rattler next from OU’s QB mill?

Riley was taken aback, but it didn’t take long to see what Kish saw in Spencer Rattler.

Rattler, who matured into the consensus No. 1 quarterback in his class, signed with the Sooners on Wednesday.

He didn’t sign up for an ordinary job — the Sooners have produced the first back-to-back Heisman Trophy-winning quarterbacks from the same school in Kyler Murray and Baker Mayfield. Murray, a first-round draft pick by the Oakland Athletics this year, has said he plans to play professional baseball after this season, leaving Rattler in line to possibly be the next big thing.

“Extremely excited to be officially apart of the Oklahoma Family!” Rattler tweeted on Wednesday. “Thank you LincolnRiley for making this the best recruitment ever. Next stop Norman.”

Rattler passed for an Arizona state record 11,083 yards and ran for more than 1,000 during his prep career.

“I think, physically, he’ll be as gifted as anybody that we’ve brought in here,” Riley said. “I’ve felt that for a long time, even when I watched him as a freshman, that he was a cut above most guys out there. So he’s got elite physical talent. And I think he’s got the mentality to come in and compete early.”

Rattler won’t be handed anything. Austin Kendall was Mayfield’s backup in 2016 and battled Murray for the starting job into fall camp this season.

“It was really a great competition between Austin and him (Murray), one that we carried on longer than maybe even we expected because of how well both guys played,” Riley said in August. “There weren’t a lot of differentiating factors in the end because both did play so well and so efficiently, but we just felt like from an overall perspective that Kyler was just a little bit ahead.”

Kendall has completed 28 of 39 passes for 265 yards and 3 touchdowns without an interception in his career.

Tanner Mordecai has seen brief action this season and has the tools to do the job. The freshman was rated a four-star recruit by ESPN and a three-star prospect by 247Sports and Rivals. Tanner Schafer, a redshirt sophomore, also could be in the mix.

That’s why Riley is trying to slow the hype about Rattler just a bit.

“As Spencer knows, we’ve got other really good quarterbacks on this roster, and there’s going to be competition like there’s always been,” he said. “But any of these guys we’ve signed, we don’t sign or recruit many of these guys if we think they’re two or three years down the line of being capable of doing it. Now, being capable is one thing; going and doing it is another.”

The next quarterback will have a chance to put up massive numbers, in part because of Riley’s system. Mayfield set the single-season FBS passer efficiency record in 2016, then he broke it in 2017. Murray is on pace to break Mayfield’s record this season.

Riley’s offense is the reason Murray thought all along that winning the Heisman was a realistic goal.

“With Coach Riley and the guys that we have on this team and the guys that they keep bringing in here, yeah, I felt like it was possible,” he said. “Obviously, sitting behind Baker and seeing what he was doing — why not?”

The next quarterback will face not only the history of the past two winners, he’ll join a program that also had Jason White in 2003 and Sam Bradford in 2008 as Heisman-winning quarterbacks.

“There’s a standard here at the position,” Murray said the day he was named the starter over Kendall. “You come here to play quarterback, you play it well. To me, that’s my job and I’m prepared to do that.” 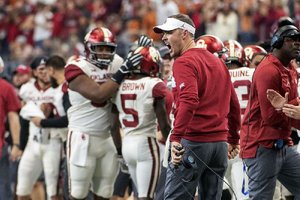 AP/JEFFREY McWHORTER
Oklahoma Coach Lincoln Riley, who has produced back-to-back Heisman Trophy winners at quarterback, will likely turn to Spencer Rattler at the position next season. Rattler signed with the Sooners on Wednesday. 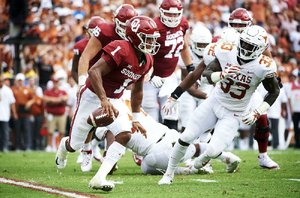