Key factors for Alabama vs. Oklahoma 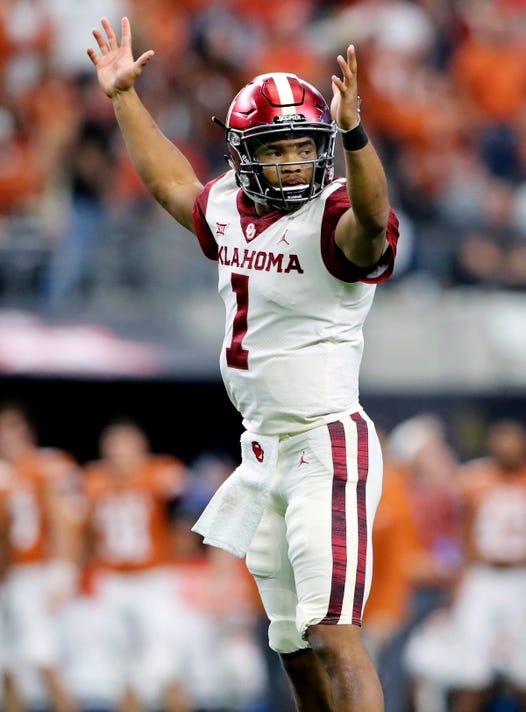 One thing is certain: The Heisman Trophy winner will be playing in the Orange Bowl. Whether that’s Alabama quarterback Tua Tagovailoa or his Oklahoma counterpart, Kyler Murray, remains to be decided.

It’s one of several intriguing backstories for this national semifinal, which pits the top-ranked and unbeaten Crimson Tide against an Oklahoma team that leaped into the four-team field after defeating Texas in the Big 12 title game to avenge its lone regular-season loss. At first blush, it’s a simple matchup of offense and defense — the Sooners’ record-setting offense against an Alabama defense that has dabbled in inconsistency yet remains one of the nation’s best.

It’s true that Murray holds the key. That Oklahoma’s offense is rolling at a historic rate in the transition from Baker Mayfield is a testament to Murray’s wide-ranging skill set, which features a rare blend of speed, arm power and athleticism. No team successfully bottled up the Sooners’ junior star, even if no team on Oklahoma’s regular-season schedule sniffed the overall strength of Alabama’s defensive core.

With at least one game to go in his season, Murray already owns the school’s single-season record for total offense. Only one team, Kansas, held Murray under 8.9 yards per pass attempt. He’s tossed multiple touchdowns in every game but one, against Oklahoma State, and in addition to his brilliance as a passer has added 892 yards and 11 touchdowns on the ground.

Countless words were written this offseason about the specter of replacing or even approximating Mayfield’s impact as a senior. As it turns, the fears were fairly overblown — Murray didn’t just match Mayfield’s statistical output but exceeded it.

Meanwhile, Alabama’s defense hit its lowest note of the season in the comeback win against Georgia to claim the Southeastern Conference championship. Like Oklahoma, the Bulldogs had enough speed at the skill positions to wobble the Tide’s vaunted defense. That performance is still an aberration for Alabama, which otherwise looked the part in dismantling the best the SEC had to offer during the regular season.

The matchup of Murray against Alabama will dominate headlines. But the theme of offense and defense should instead focus on how capably Oklahoma’s spotty defense can handle Tagovailoa and Alabama, which ranked second to the Sooners among the Football Bowl Subdivision in yards gained per play. While the Sooners are familiar with high-powered offenses, the Crimson Tide’s mix of run and pass presents a unique look for a unit more geared toward finesse than power.

Oklahoma’s defense has come up large in key moments, as in the win against West Virginia and Saturday’s win against Texas, which was keyed by a fourth-quarter safety. All the same, the Sooners sit 102nd in the country in yards allowed per play and haven’t held an opponent under 435 yards of offense since October. Meanwhile, the Tide have gained at least 500 yards and averaged at least 7.2 yards per play against every one of their opponents but two — Mississippi State and Georgia, with both games coming after the end of October.

“I don’t think we finished the season as well as we started,” Alabama coach Nick Saban said. “I think we’re capable of playing better, learning lessons from the game last night.”

An added subplot comes from the ankle injury Tagovailoa suffered against the Bulldogs, one that Nick Saban said would sideline the sophomore for two weeks but will easily occupy media space deep into December. His backup, Jalen Hurts, lifted the Tide to another victory with a pair of touchdowns in the fourth quarter. But there is reason for concern should Tagovailoa be limited in the postseason: Alabama needs to keep pace with Oklahoma on the scoreboard. In a best-case scenario, Tagovailoa regains his mobility in the weeks leading into the national semifinal and Hurts reoccupies the dual-threat, backup role that fit him like a glove during the regular season.

Instead of a traditional battle of offense and defense, the Orange Bowl might instead be decided in 21st century fashion: with offenses battling offenses in the sort of high-scoring game that has become the norm in Playoff action. Oklahoma will score in bunches. Alabama has shown it can do the same. If the Tide can’t bottle up Murray better than those mediocre defenses from the Big 12, the Orange Bowl might come down to which team holds the ball last.

“We feel like we have a team that’s worthy of it, a team that can go make a run,” said Oklahoma coach Lincoln Riley. “Probably the most exciting thing for us is we feel like our best ball is still ahead of us.”