Jadon Haselwood hints at choice in conversation with Cam Newton

However, Haselwood may have hinted that his final choice has already been made in a screenshot of an Instagram conversation the wide receiver had with NFL quarterback Cam Newton. The wide receiver posted to the screenshot, which can be seen below, to his account on Wednesday, which marked the first day of the Early Signing Period.

Haselwood blurred out part of the message with Newton, who replied as if the recruit had told him where he would be attending school.

“That’s where you goin?” Newton replied to one of Haselwood’s messages.

“Yea has to leave this mf bro,” Haselwood wrote in response. 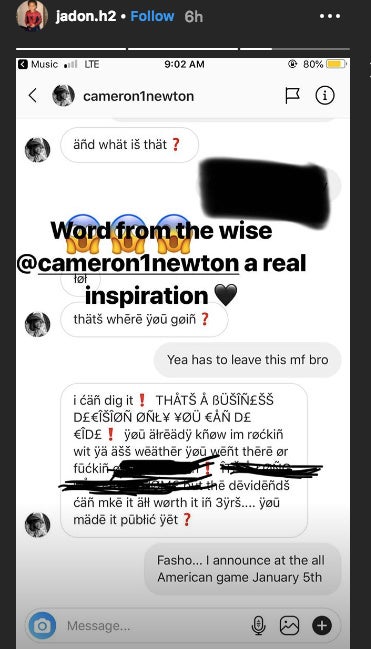 On Wednesday, 247Sports Director of Recruiting Steve Wiltfong made a crystal ball prediction for the Sooners to land Haselwood. Haselwood’s father attended Oklahoma and the prospect also has family in the area.

“As I write this prediction, the Sooners are sitting on the nation’s No. 8 recruiting class, tops in the Big 12 per the 247Sports Composite, Wiltfong wrote in an article which can be seen by 247Sports VIP members by clicking here. “It’s a haul already highlighted by outstanding pass-catchers in the No. 3 ranked receiver Theo Wease, the No. 10 ranked receiver Trejan Bridges and the No. 3 tight end Austin Stogner. Add Haselwood and epic is what comes to mind.”

The wide receiver reeled in the game-winning touchdown catch with four seconds remaining to tie the Georgia High School Association 3A state title game last week, as Cedar Grove went on to win 14-13 following the extra point. Haselwood’s cleats during the matchup featured the logos of the Georgia Bulldogs, Oklahoma Sooners, Tennessee Volunteers, Florida State Seminoles and Miami Hurricanes. The prospect officially announced those teams as the finalists in his recruitment shortly after the game ended.

Haselwood is ranked as the 247Sports Composite No. 6 overall player, No. 1 wide receiver and No. 1 overall player in the state of Georgia. Haselwood decommitted from Georgia on Oct. 2. He had been pledged to the Bulldogs since March 16, 2017.

“First, I want to start off by saying thank you God for the many blessing you have bestowed upon me and for the blessing you have in store for me in the future,” Haselwood wrote on Twitter when he announced his decommitment. “I also want to thank the University of Georgia, it’s fans, and the coaches for supporting me throughout my high school career. This is a very tough decision for me, but I feel that this is the best decision for me to make at this time. I have decided to de-commit from the University of Georgia and open my recruitment.”

We’ll learn where Haselwood will begin his college career on Jan. 5.