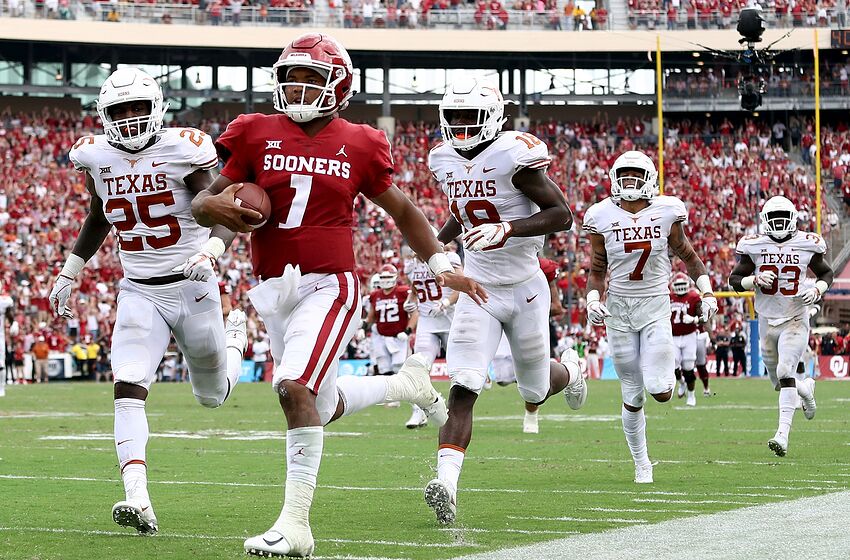 DALLAS, TX – OCTOBER 06: Kyler Murray #1 of the Oklahoma Sooners runs for a touchdown against the Texas Longhorns in the fourth quarter of the 2018 AT&T Red River Showdown at Cotton Bowl on October 6, 2018 in Dallas, Texas. (Photo by Ronald Martinez/Getty Images)

Gil Brandt gave Sooners fans hope they didn’t think possible before last week when he boldly predicted that Kyler Murray could return to Oklahoma to play his senior year.

Yesterday, after his first bold prediction that former Texas Tech head coach Kliff Kingsbury would end up with an NFL head coaching job came true, he doubled down on his original take (and dropped some ‘Yes’ lyrics along the way).

The former Dallas Cowboys’ vice president of player personnel and close friend of both Bob Stoops and Lincoln Riley clarified his take yesterday in an interview with the Daily Oklahoman, saying he was not just out to stir the pot.

“I hate to throw wild guesses out there because I think that’s the worst thing we do today,” Brandt told The Oklahoman. “And so when I put something up on my Twitter account, I really think it has an above average chance of happening.”

There is a path for Kyler Murray to both play professional baseball and return to the Sooners for one more shot at a national title.  Russell Wilson was drafted in 2010 by the Colorado Rockies, but still had two years left of college eligibility. Wilson would spend the summer fulfilling his commitment to the Rockies by playing short-season rookie league ball for the Class A Tri-City Devils.

Should Kyler Murray decide to fulfill his commitment to the A’s over the next few months, then return to Norman he could have a better feel for what life would be like on the road playing professional baseball, which is valuable information for a guy who will at some point face a tough decision between the two sports.

There are plenty of reasons to think that Kyler Murray won’t do this. Four million of them come from the contract he signed with the A’s in the offseason. However, with every day we inch closer to the Jan. 14 deadline to declare for the NFL draft and the Kyler Murray camp has been conspicuously quiet about his future plans.

Next: Oklahoma basketball: Future looks bright on hardwood and gridiron

It leads us to believe the 21-year-old Heisman Trophy winner is at least thinking about a potential return.

Sooners’ recruiting efforts figure to be helped by timing of Lincoln Riley extension announcement
OU Falls on the Road to No.8 Texas Tech