Our college football experts predict what will be the x-factor and who’s going to come out on top of Alabama-Clemson part four.
USA TODAY 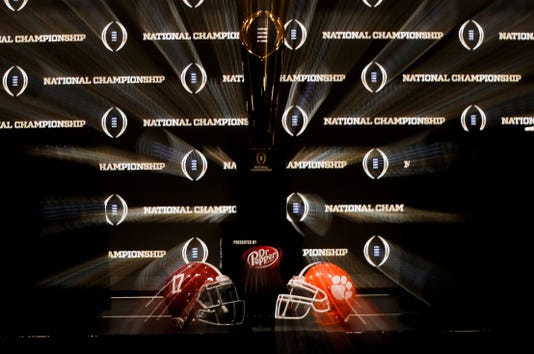 The championship trophy is seen before a news conference for the College Football Playoff championship game between Alabama and Clemson.(Photo: David J. Phillip, AP)

It all comes down to Monday night in college football when Alabama and Clemson battle for the third time in four seasons for the national championship.

Who has the edge in each aspect of the game? We break it down here.

Here are the keys to winning the title for each team:

FOUR KEYS TO AN ALABAMA WIN

Alabama’s passing game takes on an even more dangerous dimension when Tagovailoa is able to buy time in the pocket and find receivers breaking away from opposing defensive backs. In a line headed by left tackle Jonah Williams, the Tide have a unit capable of doing what no team has done all season — slow down the Clemson pass rush. Winning on clear passing plays is the biggest key for an Alabama win.

On a national scale, Jacobs was a largely unknown quantity before the Orange Bowl. That’s no longer the case after his all-around performance against Oklahoma. Alabama would be wise to keep leaning on Jacobs’ physical running style to loosen up the Tigers’ defense on early downs and also utilize his reliable hands as a receiver coming out of the backfield.

Clemson’s run defense didn’t suffer without Lawrence in the lineup against Notre Dame. Replacing the junior will be a far more difficult task against the Tide. Alabama should view Lawrence’s absence at tackle as an invitation to test the interior of Clemson’s defensive line, which may still have an All-America pick in Christian Wilkins but isn’t quite as intimidating without Lawrence in the lineup.

Alabama should try to rattle Lawrence early with its pass rush in an effort to take the true freshman out of his comfort zone. The Tide can do so through the middle behind defensive tackle Quinnen Williams and also rely on outside linebacker Anfernee Jennings to bring pressure off the edge. Relatively speaking, Clemson’s biggest weakness on offense is its offensive front, even if left tackle Mitch Hyatt has been predictably strong in protecting Lawrence’s blind side.

FOUR KEYS TO A CLEMSON WIN

Clemson should feed Lawrence a steady diet of can’t-fail throws in the first quarter in an effort to boost his confidence against the Alabama defense. The best way to do so is by throwing on first down: Lawrence has completed 71.7 percent of his throws on the opening drive of a series with 13 touchdowns against a pair of interceptions. In addition to helping Lawrence develop a rhythm, throwing on first down will keep Alabama’s defense honest.

True freshman wide receiver Justyn Ross was the breakout star of the Cotton Bowl with 148 receiving yards and two touchdowns. That continues a recent trend for Ross, who has at least 58 receiving yards in each of the Tigers’ past four games. While his recent performance has put him on Alabama’s radar, Clemson should continue to find ways to get the ball in Ross’ hands, preferably in space.

3. Have eyes on Tagovailoa

As noted, Tagovailoa might not be a true running threat but he is dangerous when moving around the pass rush to buy time for an outstanding receiver corps. One way the Tigers can combat this movement is to occasionally dedicate a defender to tracking Tagovailoa as he roams up and through the pocket. One strong option is sophomore linebacker Isaiah Simmons, who has the size and strength to fight through blockers and the speed to track down runners.

Maybe Clemson won’t find it as easy to locate open space against the Alabama defense. But the Tigers shouldn’t lose hope. Remaining committed to the run has the benefit of opening things up for Lawrence and the passing game. In addition, Clemson can feel secure in its ability to eventually pull off the sort of explosive running play that came to define the offense during the regular season.