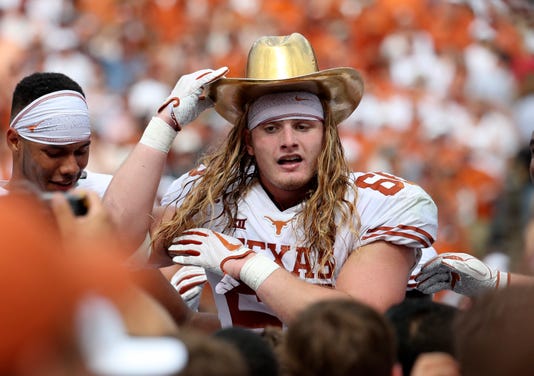 The apology came shortly after the Big 12 Conference publicly reprimanded Hager for the remarks, due to them being his “second violation of the Conference sportsmanship rules,” per commissioner Bob Bowlsby.

“I consider sportsmanship to be an essential part of the game I so truly love,” Hager wrote in a statement.

“I had no ill intentions when I made my comments about Oklahoma, which included a phrase that’s used by fans, but I have to realize that it’s different coming from me. My thought process was that it would put a fun and light-hearted charge into the greatest rivalry in college football that my family has been involved in playing for many years, but I can see now that was not the way to do it.”

Hager’s comments on Oklahoma – which Texas beat in a thriller at the Cotton Bowl earlier this season for the Sooners’ only loss – came following the Longhorns’ 24-10 win over Iowa State. The win, coupled with West Virginia’s upset loss at Oklahoma State, keeps Texas in the running for a spot in the Big 12 title game. But Hager was focused on the upcoming game against Kansas in Lawrence — where the Longhorns lost in 2016.

Hager was told that Kansas put up 40 points and 524 yards on the No. 6 Oklahoma Sooners while the Longhorns were playing, to which Hager quipped: “Hey, OU has no defense.”

“Breckyn Hager violated the Conference rule that prohibits coaches, student-athletes, athletic department staff and university personnel from making negative comments about other member institutions,” Bowlsby wrote in his reprimand, where he added the conference “expected” a public apology.

“I have the utmost respect for the University of Oklahoma and their football program and know a number of players on their team, and I want to apologize to them,” he wrote in his statement.

“I want to represent myself, my family, my football program, my University, and the Big 12 Conference in the best possible way. I’m truly sorry for the comments I made, will learn from this, and will keep working to improve my ability to think about the ramifications of what I say before I say it.”

A rather lengthy statement from Texas DE Breckyn Hager. pic.twitter.com/8PNbFrNR3O

The Austin native’s first violation of the conference’s sportsmanship rules came in 2016, when he said the Longhorns needed to “injure” Texas Tech’s star QB Patrick Mahomes, who is now lighting up the NFL.

Hager is a senior, so the only time he would see Oklahoma on the field again would be if both teams end up in the Big 12 title game. It’s not hard to imagine he’ll be greeted with plenty of “Horns Down” should that happen.